From where I stand: "Women and youth can play a significant role in building a peaceful nation"

In the small village of Deir Qanoun En Nahr, South Lebanon, Lubna Ezzeddine, a certified mediator, has made it her mission to empower women and youth as peacebuilding mediators to foster a community of trust. After participating in a community mediation programme in 2019, Lubna, together with five other women, was granted a scholarship to obtain a Professional Certification in Mediation Skills.

Established to credit the most skilled mediators and to sustain mediation networks, this certification programme was provided by UN Women in partnership with the University of Saint Joseph's Centre for Professional Mediation, and with the generous support of the Rebecca Dykes Foundation and the Government of Finland. 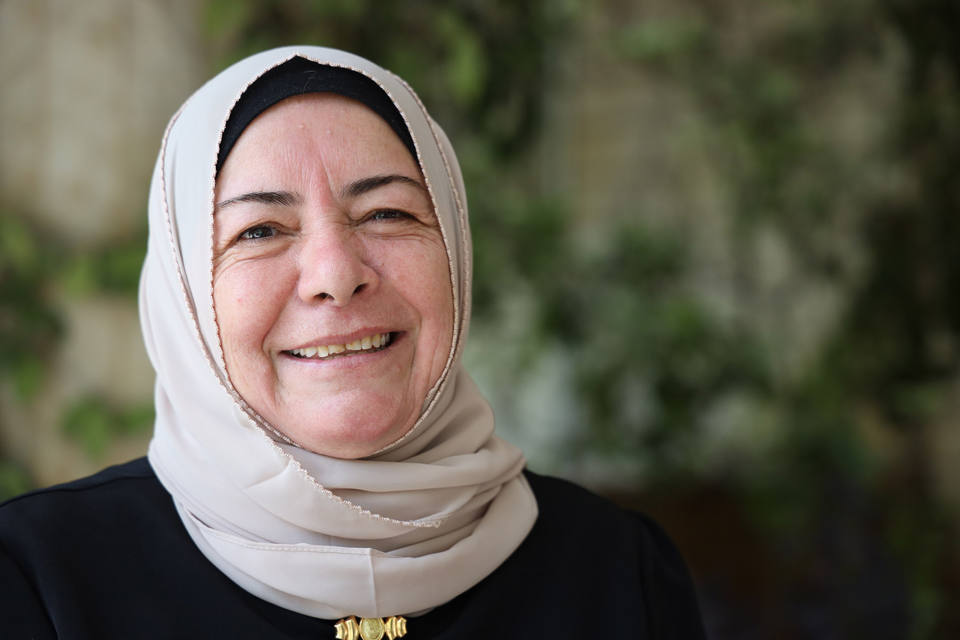 I was acting as a mediator long before I knew what mediation is. It was a skill I learned from my father, a man known for his integrity, trustworthiness, and ability to resolve other's problems. As a child, I vividly recall neighbours from our town and even beyond would come to seek his support to mediate their disputes.”

Despite having learned such an essential skill, life took me on a different course. I married at the age of seventeen, became a mother to five children, and began working as an education coordinator at a local community school. My work in the sector often reminded me of what I believed was a distant dream of completing my studies and attending college.

So, when the Municipality of Deir Qanoun En Nahr first announced the launch of the UN Women mediation training sessions, the mediator inside of me awakened - I immediately joined.

For nine months, I learned vital mediation skills including, a mediator's role in effective peacebuilding efforts. I had the chance to practice this in my local community. In this time, I recognised the importance of fostering a community built on trust, where members could find peaceful solutions for their problems through mediation and negotiation.

After the training sessions finished, UN Women offered me a scholarship to study mediation at the University of Saint Joseph's Centre for Professional Mediation. Thus, my dream to attend college finally came true!

I became immersed in the experience of learning new skills in mediation, led by inspirational professors and a year later, I obtained a Diploma[1] in Mediation Efficiency. An achievement that I am very proud of.

And now, like my father, I have become known for my active role as a community mediator. For example, I recently mediated a dispute between a family and a local farmer; the family filed a complaint to the local municipality because the farmer's cows would graze close to their house where their smell would linger in their property. Before the issue reached new heights, I offered my assistance to mediate between both parties neutrally.

By coming together, they could listen to each other's perspectives: a farmer, whose sole source of income is from his livestock and used to provide for three families, and a family who is not so accustomed to village life. As a result, the two parties could find a peaceful and effective solution to the matter; the farmer increased the distance from the family's house, allowing his cows to continue grazing without causing further problems.

In villages and small towns, tensions like this often exist amongst neighbours, community members, and even families. That is when I had the idea to establish regular informal sessions at my own house, in which I provided a space for women, youth and other community members to learn and practice mediation.

I always engage youth in the sessions, both girls and boys, because I believe in an equal society. The boys are excited to come to the sessions, and they tell me how these sessions have contributed to changing the way they treat their sisters; and how they became better listeners.

Women and youth have the ability to mediate and can play a significant role in building a peaceful nation. It is imperative to empower them as the next generation of peacebuilders and mediators.

I have always dreamt of an equal world, where peace and security prevail, and I believe that the only way to build such a world is through negotiation and dialogue, two skills any mediator should have."

UN Women’s local mediation work in South Lebanon began in late 2018 through the generous support of the Government of Italy and later from 2019 to 2020 through the support of the Rebecca Dykes Foundation. This project has been expanded to support the establishment of women’s mediation networks across all governorates in Lebanon through support from the Government of Finland. This project is part of UN Women’s Women, Peace and Security Programme, which seeks to increase women’s engagement in conflict prevention and management and peacebuilding efforts.

[1] Lubna received a professional certification from Saint-Joseph University in 2019, with the generous support from the Government of Italy. The certification programme was established to ensure those that are most skilled have accreditation to sustain the mediation networks.

Related News
28/10/2022
The Government of Japan and UN Women launch a women-led social enterprise producing disposable hygienic products in Tripoli, Lebanon
21/12/2022
In mediation, Jana finds a way to build peace in Lebanon
20/09/2022
Women in Lebanon at the forefront of non-violent conflict resolution through UN Support
26/05/2022
LAUNCH OF MANUAL TO SUPPORT WOMEN’S LEADERSHIP IN CONFLICT PREVENTION AND MANAGEMENT IN LEBANON
26/04/2022
From where I stand: “It is our right to know the fate of our loved ones who disappeared”
END_OF_DOCUMENT_TOKEN_TO_BE_REPLACED